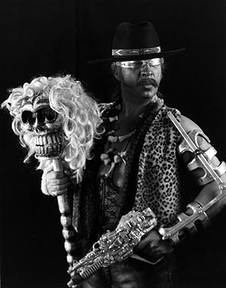 Establishing a link between the posthuman and other theoretical frameworks that have sought to unsettle essentialist conceptions of the subject, such as feminism or postcolonialism, Lucian Gomoll proposes the term ‘Posthuman Performance’ to refer to performative interventions that explore relationships and social transformation outside the parameters of liberal humanism, but without ignoring or doing away with the live body (Gomoll, 2011).

An example of this posthuman tendency in performance art can be found in the ‘ethno-cyborgs’ or living ‘multicultural Frankensteins’ that featured in a series of interactive performance-installations created by Guillermo Gómez-Peña and La Pocha Nostra in the late 1990s. In works like the ‘Mexterminator Project’ (a clear reference to the superhuman, robotic assassins of the Schwarzenegger movies), this loose network of Chican@/Latin@ performance artists investigated issues of race and multiculturalism, gender and language, colonialism, as well as borders and geo-politics in contemporary society by adopting ‘robo-baroque’ aesthetics, incorporating digital technologies, and promoting interactivity between the performer and live audience. ‘Mad Mex’, ‘Stelarc of Tijuana’, and ‘Ciber Vato’, are a few of the hybrid specimens ‘armed with mysterious shamanic artefacts and sci-fi automatic weapons’, whose bodies were ‘enhanced with prosthetic implants’, decorated with Aztec tattoos and clothed with ‘high Tex-Mex/gangster-rap regalia’ (Gómez-Peña, 2000). The audience’s interaction with these complex personae, which were directly inspired by the responses provided by thousands of anonymous internet users when asked to share their ideas about Latinos and indigenous people, reflected ‘their own psychological and cultural monsters’ (Gómez-Peña, 2000). On the one hand, these ‘ethno-techno’ experimental performances called into question traditional notions of the human in Western culture and decentered ‘white human exceptionalism and determinism by emphasizing relationality in terms of technology, the carnivalesque, animality, body modification, and madness.’ (Gomoll, 2011) On the other, being modelled by people’s own preconceptions of otherness, it could be argued that these characters also embodied society’s own post-colonial demons and racial prejudices. Following Braidotti, they engendered ‘its own forms of inhumanity’ (Braidotti, 2013).

In the light of the current restrictive immigration policies and increasing manifestations of xenophobia, neo-fascism, and the rise of ultra-conservative governments around the world, the potential for a radical politics and pedagogy proposed by the posthuman figure of the ‘ethno-cyborg’ might be worth revisiting.