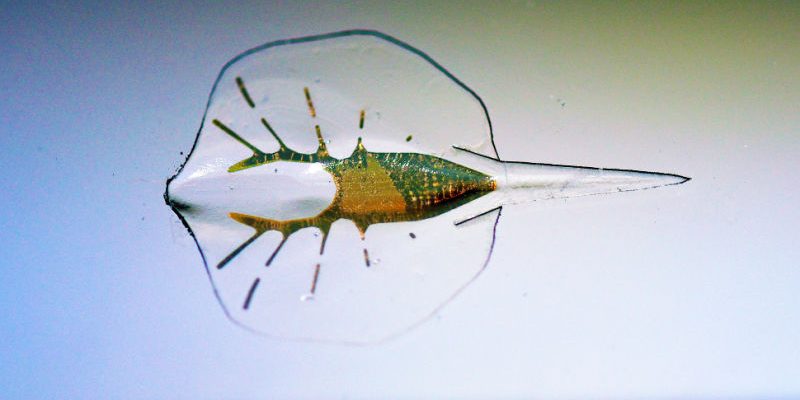 An example which I believe raises pertinent issues to our investigation of the posthuman is the cyborg stingray created by a research group in the Disease Biophysics Group at Harvard University. Its “body” (for lack of a better word) composed of a structure of silicone and gold surrounded by cultivated rat heart muscle cells, this tissue-engineered bio-machine presents us with several posthuman traits including a blurring of the boundaries between biological and mechanical, animate and inert. Short of being what could be considered a “being”, it can’t be classified as merely a machine either. The cyborg ray is remote-controlled using light to trigger programmed contractions of the muscle tissues, causing it to propel itself forward. Not precisely perception, there is indeed a perceptual aspect to this light sensitivity, again arriving at an impasse in attempts to define what faculties determine beings from automata. Though this example is not drawn from an art context, it has much to say about the modalities of the posthuman which pervade bioart. Experimentation with novel forms of life within a continuum including manipulated species, as well as semi-living and non-living materials, has been a strong theme within this field. There is also a notable fixation on animism in posthuman art, demanding that all things must move, react, if not live.

Article on this project in Science:

2 Comments on "Biomachinery: Between Animate and Abiotic"

Member
Frederik Thielke Mølgaard
Hi, I would first of all like to say that I really enjoyed this example of a quasi-being entity. Its composites of silicon, gold, and cultivated heart muscle cells from a rat a truly dazzling entity for the posthuman field. I would though, argue that its perceptual ability is non-existing in this example since it’s remote-controlled, but I think that this entity is of great value on so many levels, as you too point out when you mention bioart and semi-living and non-living materials. To me, this example opens to the discussion of whether certain materials, non-living, can consitute a… Read more »
Vote Up0Vote Down  Reply

I second that – very interesting example, particularly in the context of the Artificial Life debate.