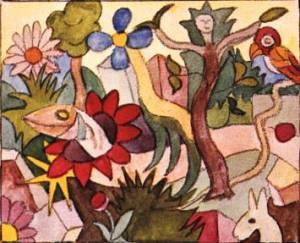 Bulwer-Lytton’s narrative describes a precarious human species as “the child (of the nether valley) could have killed me as easily as a man can kill a bird or a butterfly”. The child can fly – the human narrator cannot. It brings associations to the German writer Herman Hesse’s fantasy Pictor’s Metamorphoses (1922) in which the creatures have in them all aspects of life. That is mineral, animal, plant and human qualities.

As Braidotti writes in her book Metamorphoses. Toward Materialist Theory of Becoming (2002: 118-119) “Becoming woman/animal/insect” is an affect that flows pushing the subject to his or her limits, in a constant encounter with external different others.

At some point in Bulwer-Lytton’s narrative, the human is seen as ‘some rare wild animal’ – the nether world in which the narrator is absorbed can be seen as un-doing his civilized and ‘all-to-human’ coat and reflects other aspects of his being.

In that sense the writer expresses early posthumanist ideas of transgressing dualistic ways of categorizing naturecultures (Haraway, 2003) – though in the writer’s Atlantis like imagination it is a future, a coming or becoming race, not a lived reality for the narrator of the story. I associated to Danish writer H. C. Andersen’s little match girl (first published in 1845) who in a dying glimpse sees a warm idealized world, because what is told by Bulwer-Lytton is also a harsh critique of the human and a hymn for an angelic superhuman order.

Finally, a posthumanist understanding of Vril as a larger than life energy form can be reflected by the concept of Zoe, ‘ life’s pure inhuman force’, (Braidotti, 2002: 132-133), a poetic vitalist and materialist reconfiguration of how to move on from here, an affirmative and egalitarian take on posthuman subjectivities, becoming cosmos-politans, ontologically relational beings of the world.

3 Comments on "Becoming bird, becoming Other – glimpses of affect and affirmation in The Coming Race"

Your mention of the curious properties of the wings in The Coming Race as being representative of a kind of “creatures [which] have in them all aspects of life” also sparks something for me. The story does seem to idealise a kind of cybernetic being, and although the wings are not integrated into the body as such they seem to function seamlessly with it. The narrator’s wavering between fear and awe also reflects this nuanced perspective on a future race as being super-human at the same time as appearing terrifying in its in-human qualities.

The point about the vril is very interesting, and I think also bordering to the view of one truth lying beyond the “veil”. The question is, if this is still valid, the one truth, the holy grail, that we need to discover in order to become super/post-human? Is the modern/postmodern/posthuman world not so complex that one must accept many truths?

Member
Maja Tingberg Kruse
Hi Charlotte! I find it interesting that you write that: “the nether world in which the narrator is absorbed can be seen as un-doing his civilized and ‘all-to-human’ coat and reflects other aspects of his being.” What caught my attention was that you describe the narrators experience in the underworld as an un-doing of his civilized coat. One view could be that the Ana-race is extremely civilized, but as you say it can also be seen as representing some kind of postcivilization due to the posthuman nature of the other race. One definition of civilization from dictionary.com: “having an advanced… Read more »
Vote Up0Vote Down  Reply