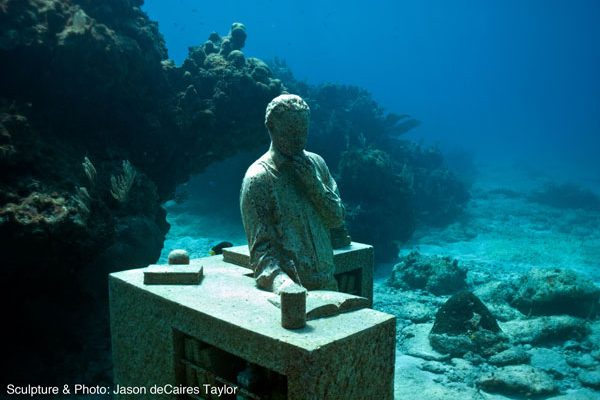 The question of criteria in the service of defining the post human does not resonate with the idea of the post human as becoming, as a figure of ‘permanent possibility’ that derives, in part, through a greater ‘accommodation of the non-human’ (Krull, 2002: 85). The undersea sculpture museums of Jason de Caires Taylor reflect this dimension of the non-human. Life-sized sculptures of people are embedded on the sea floor. The first museum was installed in 2006 and is comprised of sixty-five sculptures in Molinère Bay off the coast of Grenada. In 2009 the Museo Sub Aquatico D’Arte (MUSA) was formed of five hundred sculptures in the Gulf of Mexico and the most recent museum Atlantico is the most political work of de Caires Taylor and Europe’s first undersea museum, off the Canary Islands in the Atlantic Ocean. The museums perform ecological art, in aiming to replenish the oceanic substrata as ‘nature’ colonises and overtakes ‘humans’ to form the hybrid ‘artificial reef’. de Caires Taylor himself acknowledges the irony of knowing that his art will only be complete when it is no longer recognisable and with this the humanist ‘autonomous artist’ is decentred as his work submits to the artistry of the ‘alien ocean’ (Helmreich, 2009). The museums are even conceivable as bioart if it is at all possible to grant the ocean the status of a laboratory, full of interventions that disfigure, transform and recode the material that is presented as ‘human’. And just as the posthuman is a contradictory figure (Dixon, 2008), so this art represents, contra Sedlmayre’s (1957/2007: 149) view, a hankering for the organic, a symptom that was perhaps still emerging at his time of writing. Symbolically these museums capture the finitude of the human, of ‘the modern’ as archaeological subject, submerged in the “maternal sublime” (Lambert et al, 2006) that constitutes the blue planetary life source, of amphibian origins and a new anxiety of return as the Anthropocene laps at the shores of the fiefdoms.

1 Comment on "Atlantis and the finitude of the human"

A great take on a very interesting art project! I like the idea that nature sort of reclaim these human made sculptures, but I could not help noticing, when I browsed through pictures of them on Google, that even though some of them were completely covered with sea organisms, you could still make out something unmistakable human. Therefore these sculptures can also designate the almost everlasting impact of humans on earth. Like a plastic bottle nestled in the grass on the forest floor for a 1000 years.