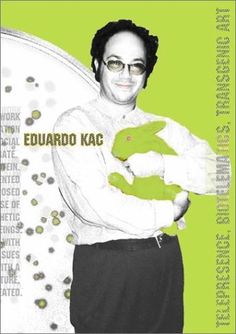 As the self-described slayer of dualisms, posthumanism is rumoured to destabilize venerable dichotomies like human/animal & mind/body. Bio-art can perhaps body forth these postulated category meltdowns. The condition of possibility of bio-art’s enmeshing of bodies with technologies is the structural intimacy of art & science. The artist will have to romance his bio-technician, and there is no guarantee of a ‘happily ever after.’

If art has characteristics of the moral imperative, aesthetics & ethics in posthumanism are joined at the hip. Science can prattle about ‘ethically obtained donor cells;’ can art speak of ‘ethically obtained animal matter’ for Eduardo Kac’s GFP Bunny? As the rabbit cannot consent, it did not. Yet it was not harmed. But this is splashing around in very shallow waters.

The body as last frontier of cultural colonization is rendered claylike for bio-art because technology does not argue or negotiate with biology, it dictates. So human intelligent design actualises earlier fantasies of imago Dei, and hubris overlays the quest for alternatives to anthropocentrism. The nonhuman body is therefore ontologized as artistic raw material.

Kac’s fluorescent rabbit reproduces the institutional practices of scientific animal research, ethically not unproblematic. And science always has the last word. Kac wanted to adopt the rabbit Alba after the event, but was refused. Hence Alba remained a lab rat for the rest of her life. The aftermath demonstrates why ‘Capitalocene’ is more appropriate than ‘Anthropocene’ for the broken world to come: the procedure was commercialized for GFP zebrafish, sold as ‘GloFish.’

More sophisticated defenses of GFP Bunny: (i) visualising the non-visual (genetic engineering); (ii) questioning the construction of ‘difference’ via the gene as a social marker. But that is much ado,- with the life & body of Alba as means,- about precious little, while the animal remains human property to be acted upon as artistic whim dictates. Animal bodies in art was not nurtured in the desert; its necessary conditions are domestication and centuries of animal (ab)use.

How then, has the human/animal dichotomy been undermined in GFP Bunny? And around it frolic all the lesser dualisms that exalt homo sapiens into homo mesura. Ecce posthumanist humanism. Will posthumanist posthumanism remain an uninstantiated Platonic form forever and a day?

4 Comments on "Art in Animalface"

Member
Laura Benítez Valero
Hi Leon. Thank you very much for your post. I worked a lot on GFP Bunny during my PhD and I have to say that we share some perspectives. Probably one of the most controversial issues on the post-anthropocentric shift is related to agency. How to inhabit a possible posthuman_future context without stablisihing hierarchical relationships with those “others”? From my perspective, a possibility is to base the post-anthropocentric shift in monistic ontology (Spinoza), understanding that we (all) are in a rhizomatic plane of symbiotic inter-dependence. But, at the same time, or simultaneously to be more rigorous, monistic ontology challenge us… Read more »
Vote Up1Vote Down  Reply

Author
Leon Human
Hi Laura. I think it’s important to highlight the issue o of not stablisihing hierarchical relationships, as you do. The monistic ontology would be akin to deep environmentalism in some forms, apart from its lack of emphasis on the individual being. As the only species who provides evidence of thinking such thoughts, there is a danger of an always resurfacing speciesism, don’t you think? As in the neo-Kantian Christine Korsgaard, who situates it in our ability to be moral despite granting equal moral status to all. You’re right about the centrality of agency, I think, without redefining it, it’s not… Read more »
Vote Up0Vote Down  Reply

Member
Sebastian Edin
Interesting post, Leon! I too find it more than a little disconcerting when Kac talks about the future artist becoming a genetic programmer, increasing global diversity by inventing new life forms (he writes along those lines in his Telepresence and Bio Art from 2005). And even though (and he’s been under fire for sure) he’s stated time and time again of how much he cares for the animals with whom he “collaborates”, the fact is that, as you said, Alba was and remained laboratory property (and certainly gave no consent of having her genome tampered with). Regarding your very last… Read more »
Vote Up1Vote Down  Reply

Author
Leon Human
Hi Sebastian. Thanks for your interesting and perceptive comment. I came across the Wolfe you mention about 2 years ago, as you suspected, but don’t have it at hand. I recall some of it via the names: – HH was Rawls & Habermas; HP was Singer & Regan; PH was Zizek & Rorty; and PP was Derrida & Harraway. I agree for him it’s not Platonic, I’m just a bit more skeptical about attainability. But if ‘ought’ does not imply ‘can’, then we can be motivated by unfulfillabe obligations, as in pursuing these PP aspects irrespective of ultimate success. I… Read more »
Vote Up0Vote Down  Reply