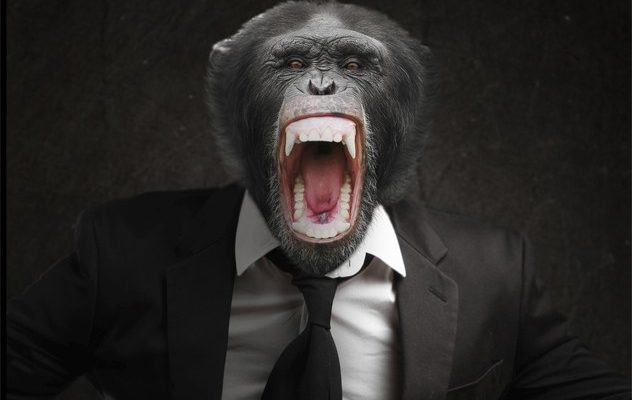 Slogging through the turgid prose of The Coming Race, one is struck by the fact that the Narrator most often describes his relation to the superior Vril-ya beings in terms of his own animalization.

Since this relation is experienced in terms of humiliation and shame, the animal figure serves to situate the human as such within a civilisational hierarchy. The Narrator ‘inferiorizes’ himself in relation to the Vril-ya’s physicality, emotional equanimity, and technological pre-eminence.

While one might have expected more emphasis on the incommensurability of values given such disparate cultures, narrative opaqueness is prevented by two universals: personal love and animal subjection. Love is possible between the different hominids, and both keep animals at hand and kill them, if necessary (although the superior beings, in a then not so threadbare trope, do not eat animal flesh).

So, despite the tranquil emotional lives of the Vril-ya, visible in their visages (like those of gods or the dead) devoid of the lines of care and sorrow, they are still subject to the throes of love. This can be forgiven as a plot device, and relates to animalization in that love for a human humanizes the Vril-ya even as the Narrator is dehumanized in relation to their overall superiority.

Insofar as animals are concerned, the Vril-ya keep them in cages, for the Narrator encounters birds in an aviary whose singing is akin to opera (even the birdsong is superior in these climes). They also kill them, as when the child Taee kills a Krek (monster) with evident pleasure in Chapter 18, and muses about the suffering this being must have inflicted during its life. This familiar contempt for predation and suffering in the wild, as well as self-mythologizing as the saviour of sentient beings, thus occurs on both sides of the civilisational chasm.

On the other hand, in relation to the Narrator, he discerns in the Vril-ya  “…a lofty pity and tenderness, such as that with which we may gaze on some suffering bird or butterfly.” This, however, is followed by the realisation that he could be killed as easily as he himself could kill a butterfly, –  “…as if I were some rare wild animal.” His self-animalization is in terms of the superior power of the Other and the vulnerability and mortality of his own human body.

The final humiliation is to enter the ‘petting order’ and performing tricks. The Narrator  views the Vril-ya child’s pleasure in his company as comparable to that of a human child with  a pet dog or monkey. He recalls his nephew teaching a poodle to walk on its hind legs, and observes, rather bitterly, that: “I willingly lent myself to such experiments, but I never achieved the success of the poodle.” (chapter 20).

The humiliated student of Vril-ya superiority, despite his abject animalized conceptualisations, also manages to express early posthuman ideas such as: problematizing emerging technologies and reflecting on the gap between technological perfection and his own organic inefficiency. Et cetera.

The discovery of posthumanism avant la lettre cannot come as a big surprise if the theoretical impulse to do so is nurtured, even if there is a danger that such nurturing will lead to a poverty of invention.

Member
Lara Eva Sochor
I really like the angle you took in this assignment by concentrating on the aspect of animalisation. While reading I also found it striking how the Vril-ya essentially turn the tables on the narrator: As a member of the most developed species in his own world, he is thrown into another world, where all the achievement he and his own hold in high regard turn out to be smiled upon by his hosts. In essence the Vril-ya are giving the narrator – and hence the reader who by affiliation alone has to sympathize – a taste of their own medicine… Read more »
Vote Up2Vote Down  Reply

Dear Lara
Thanks for your interesting comment. I should have spelt out the ‘turning of the tables’ aspect a bit more.

Hi Leon,
I really enjoyed reading your post especially your interesting take on dehumanisation. However, there is one point in your argument that I was not quite able to follow. You state that „the narrator is dehumanized in relation to their (the Vril-ya’s) overall superiority“. What do mean by dehumanised here exactly? Is the narrator (as a representative of the human species) pushed more and more towards the animal range of the spectrum of living species, due to this contrast which sets up the inferior human against the superior Vril-ya? So, does dehumanisation equal an increasing animalisation in this context?

Hi Claudia…thanks for this. Yes, that’s what I meant, in the way he says he can be killed like a butterfly or how he is akin to a poodle performing tricks.