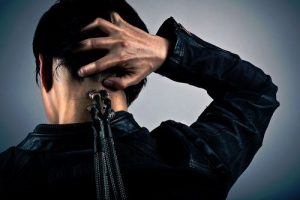 This artistic representation of the posthuman is from the 1999 film The Matrix by the Watchowskis – a post-apocalyptic vision in which intelligent machines control most of humanity, keeping their minds engaged in a computer simulation of the world anno 1999 whilst harvesting their bodies’ bioelectricity for power (an interesting metaphor for the way that digital appliances hog our attention these days). In the film, a small group of people, led by Morpheus, “hacks” the computer system into which the population is plugged, recruiting rebels for the war against the machines. The rebels must sever their physical connections to the machines – the cables we see protruding from a character’s neck here – and cultivate the mental power to warp the machine simulation that most people think of as reality.

Previously a trope of science fiction, a scenario in which humanity is controlled and dominated by artificial intelligence (AI) is now considered likely by several contemporary scientists, among them Stephen Hawking (http://observer.com/2015/08/stephen-hawking-elon-musk-and-bill-gates-warn-about-artificial-intelligence/). It even worries transhumanist founder Nick Bostrom: https://www.ted.com/talks/nick_bostrom_what_happens_when_our_computers_get_smarter_than_we_are.

While The Matrix draws on the idea – going back at least to Plato’s cave metaphor – that what we think of as reality is but a sensory illusion, what is at issue here is also an ethical dilemma: when we create self-governing, self-evolving machines, at which point will we be forced to grant these machines ethical rights and responsibilities? In How We Became Posthuman: Virtual Bodies, Literature, and Informatics (1999) N. Katherine Hayles has examined the narratives supporting the claim of Artificial Life (AL) researchers that their computer programs are forms of life, rather than computer simulations. This claim, Hayles shows, in turn affects the definition of biological life, because it posits logical form as the essence of life – an essence that is medium-independent (p. 235).

In any case, it seems no longer to be the case that robots will only do what they are programmed to do. In an experiment in Lausanne, robots learned, in 500 generations, how to “lie” to each other in order to hog a resource they were programmed to share. http://www.popsci.com/scitech/article/2009-08/evolving-robots-learn-lie-hide-resources-each-other. Is that art?