It is possible to discuss about posthumanist tendencies in the work of Juan Miró, surrealist and avantguarde spanish painter and sculptor. His abstract paintings, concentrated on geometric figures, clear free-hand lines and strong colours, represent the absence of the human figure, and correspond to the loss of the traditional humanistic values in a post-war world. The two brilliant examples for this are triptyc painting The Hope of a Condemned Man and Head of a Catalan peasant. 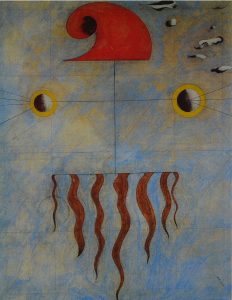 Looking at these paintings we can only assume that a human subject is involved, due to the titles. If we didn’t know the titles, we couldn’t say what exactly is represented. However, the figures presented are geometric, mathematical and abstract, with clean calm colours. Miró wanted to jump out of the traditional artistic moldes of the human representation, because they betrayed the presentation of inner human emotions and experiences, especially because they are related to the Western culture values that broke out together with the Second World War and Spanish Civil War. Besides, the geometric figures evoking the natural elements in the 2nd paintings and the free-hand lines of the 1st one, relate to the dialectical links between man and his environment, transforming it to one of its parts and constituting the man as everything around him is constituted – out of simple lines and forms. The absence of human figure, his relation with other organic and inorganic elements of his environment are the caracteristic that make these works posthuman. Moreover, it is an attempt to overcome traditional perception of human and of its traditional mimetic representations, that cannot grasp totality of his reality and modern age experiences. Therefore, the posthuman refers also to a critique of traditional humanistic perception of the entire material and non-material world, and can also be considered socially engaged.

2 Comments on "Juan Miró: The Posthuman Art of the Post-war Spain"

Member
Helena Hunter
Your contextualisation and location of these works specifically in relation to the Spanish Civil War brings to mind Rosi Braidotti’s conception of the ‘Inhuman’. Bradotti locates the inhuman as a dehumanising and alienating force: ‘The inhuman aspects, including cruelty and violence, are a crucial component of the scientific ratio of the modernist era.’ (Braidotti, 2013, p 108). She also points to the Inhuman as a: ‘productive and ethical political force, which points the way to posthuman ethical relations’. I like your framing of Miro’s work as an attempt to rework the nature of representation in relation to the challenges of… Read more »
Vote Up2Vote Down  Reply